Many moments in my husband’s sixteen month battle with colon cancer, I wondered how much more we could take. One more set back, one more battle with flu, dehydration, one more chemo that depleted every ounce of energy or fluid left in his body; one more blow that our blood counts weren’t going down, but in fact, were doing the complete opposite, with a steady climb upward. It broke my heart, I tried to fill the prescriptions faster, have paperwork ready beforehand, and not to mention, the laundry done, floors swept and mopped, dusted shelves, and an infant that barely made a noise, because he was just content at all times. The appointments were made, the lawn was mowed during nap times of both of my boys–my husband and our son– so as not to miss a beat of them needing me while they were awake.

Some days though, I was just depleted. One hundred and fifty percent, spent. Exhausted. And I wanted to give up. I wanted to cry, throw a fit, go for a walk, maybe even get a pedicure, to just relax from the most daunting task of all. Taking care of my sick husband, and our sweet, fresh baby that came in the midst of fighting cancer, took a toll. That wasn’t an option though. It never was, it never is, and it never will be. I often cried on that mower, or in the shower. I often stifled tears, and talked myself down while I was doing laundry, or bringing wood in for the fire place. I even sent mass texts out: begging for prayers of patience, strength, endurance, and understanding.

Eight months pregnant before our second surgery in July 2013.

And even though my sweet husband said, “Thank you” more times than I could ever remember–for every single thing I did for him, some days, those two words didn’t seem to be enough. You know what was enough, though? The way he looked at me from across the room as I changed another dirty diaper, grabbed another drink out of the fridge for him, and wiped up spit up–that look was enough. The way he smiled, or held me longer in a hug, made me know he was grateful beyond any words he could say. The way he squeezed my hand in the middle of the night, or I quietly heard him whispering a prayer to God, thanking Him for his wife: THAT was enough. His sweet random texts I received in the middle of my teaching days, to say, “I could never tell you thank you for all you do for our family. I promise I will fight to be the husband you deserve.” THAT was enough.

When he got up every single morning, on chemotherapy or not, and cooked me eggs, bacon, and toast, while bringing a cup of hot coffee to my vanity while I got ready for work–THAT was enough. When he woke up in the middle of the night, in between feedings of our son, and needed more pain medication, requiring me to get up one more time; thank you didn’t seem enough. But when I crawled back into bed, and he kissed my forehead and told me he couldn’t make it without me: THAT was enough. When he knew every other week, he walked into a clinic to be hooked up to chemo that would make him sick until the next time he had to walk in, THAT was enough. He never once complained; he never once asked if we could stop trying to fight; THAT was enough. When the pain was unbearable, and his eyes begged me to make it better, while he gasped for more air, and I felt helpless and hopeless, “me” was out the window. He was enough; his fight, strength, determination to be a Dad and Husband the rest of his days, THAT was enough. The hospital camp-outs in the floor, the second-opinions, the unmatched days and nights that we got to be a family at home in the floor, and avoid the rat race of life: THAT was enough.

Joe at our chemotherapy appointment, while our two-month old son naps on a pallet next to him.

There are many titles I have had the honor of holding. Other than Joe’s wife and mother to his son, caregiver is my favorite. It was, and is, the most difficult phase of life I have been through. It is also the most honorable and beautiful thing I have ever been through. There is no way I could have allowed someone else to do what he needed those sixteen months. I only wanted him to know that every single act I did for him, whether it was keeping track of when and what to administer of his medication, or carry him to our bed because he didn’t have the strength to stand up, or to feed him like a small child when he was too weak to pick up a spoon or wipe his mouth; yeah, every bit of that, was my way of saying “Thank you” for every day he fought for us to remain a family. 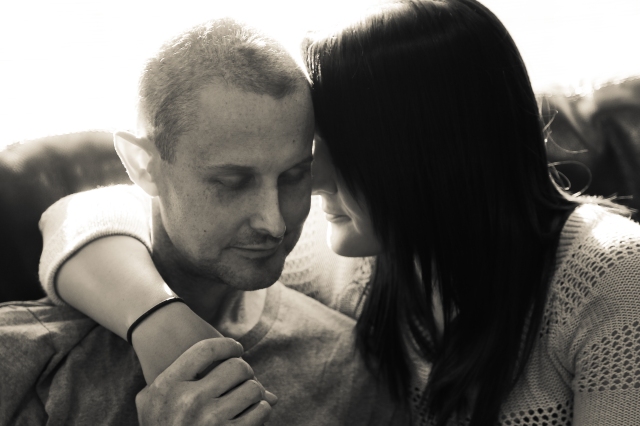 When thank you doesn’t seem enough in battles of your hardest days, what else do you see that is enough? Maybe even the look from across the room is all you need, to realize that “Thank You” isn’t enough; they don’t, and could never, have the words to say just how grateful they are for all you do for them.

It’s been three years without him; he still sends me signs every single day of how grateful he is for me. What he may never know, though, is just how grateful I am for him and all he gave me and made me.